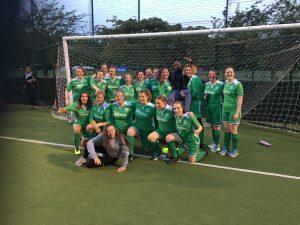 UPWPFC at their first ever game vs Crawley Old Girls

UKWPFC was set up last year by iNHouse Communications to give female MPs, journalists and staffers in Westminster the chance to play football. The endeavour has been a roaring success – 12 players turned up to represent the side in what had been billed as a five-aside game.

From the start this was an exhilarating, end-to-end tie. Crawley, looking to seize the initiative early on, were denied twice in the opening minutes by UKWPFC’s Labour defensive pairing of Alison McGovern and Rosena Allin-Khan. But the Parliamentary Women grew into the game and carried a threat on the counter attack. The Daily Telegraph’s Camilla Tominey fired narrowly wide after an attacking move that wouldn’t have looked out of place at the forthcoming Women’s World Cup.

After falling behind to a fierce Crawley effort from Karen Turner, aka Trig, Redcar MP and part time goalkeeper Anna Turley made a string of stunning saves, including one Gordon Banks-esque effort that prompted deserved congratulations from her team mates. But when Crawley’s Kim Condon made it 2-0, the game looked over, not least because UKWPFC striker and former sports minister Tracey Crouch had switched sides at half time in order to give everyone a chance to play. SNP MP Hannah Bardell, however, had other ideas. After a Cruyff turn that sent defenders sprawling, the Livingston Messi sent a scorching effort past Crawley’s keeper to reduce the deficit. UKWPFC had their tails up, and minutes later Bardell agonisingly struck the bar. Crawley’s Karen Jupp scored against the run of play to make it 3-1, before Bardell notched a second to set up a frantic final minute. On the ropes, Crawley had to call upon their greater experience to repel the Westminster side.

As the final whistle blew on a 3-2 Crawley win, it was the

UKWPFC players and their fans celebrating: they may have lost the game, but there was a sense that all the training and all the organising had finally been worth it. They had done it. A new team had been born.